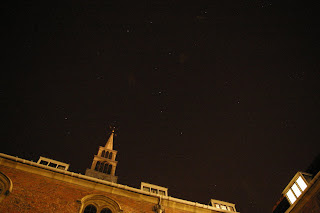 Okay, no more complaints about women sux. No more emotional roller-coaster. My apologies to my friends who had to hear me rant for months. The situation has been resolved. So, I thought that this would be a good time to blog about it.

There's this person here that I am really attracted to. So, naturally, I started to show interest and was hoping that our friendship would blossom into something more. At first, the signs seemed promising. She even gave me gifts (v'day, b'day...) and such. So, I stepped up to the plate. I started asking her out more and we ended up doing spending more time together. That's when things started getting really weird. The signs that I got were so confusing. So, it was a very distressing summer for me.

Then, I started to feel our friendship getting affected. That's when I started to really worry. I value the friendship, and I didn't want our nice long chats to turn into a minute long hi-bye relationship. So, I decided to just handle the situation, the way that I handle all situations. Head-on! So, I asked her out for a meal, to talk. Thankfully, she responded and we arranged to meet.

But then, fate threw a wrench in the works. Maybe it was a sign. I wasn't very specific where we were supposed to meet. I ended up waiting at NEXT in Grafton, and she ended up waiting at the one in the city. And then, we swapped places with me going to the city and her going to the Grafton. So, my first attempt at handling it, didn't work out. Then, she rescheduled and I have just returned from dinner with her.

Haha, keeping you all in suspense for so long. We're going to continue to be friends. That's that then. I didn't bother to ask why there were all the conflicting signs, as I didn't feel that it was any useful besides serving to shatter my self confidence, which I don't need. According to a friend, women are very good at giving out mating signals even though they may not mean it. If she wants to tell me why, I guess that she will do so, without me having to bother to ask.

Well, she did tell me that she got a very clear signal from me that I was going after her. She says, that it's sometimes a little difficult to tell with some people (I'm not really sure if that was a compliment). Well, the one thing that I think that she could've handled better was to tell me how she felt earlier, since she already knew that I was interested in her. I'm a big boy, I should be able to take rejection.

Well, at least I'm honest with myself. I expressed my feelings, and I got a rejection (a fairly short one - no beating round the bush, which was good). It didn't turn out as well as I had hoped it could have, but at least, we'll stay friends. These things cannot be forced anyway. And fate has a lot to do with it!

PS: Don't bother asking me who she is! Don't bother guessing even! The only reply that you will get out of me is a cheeky smile.

Sorry to hear this. I hoped you are fine and would recover emotionally soon. Good luck, my friend.