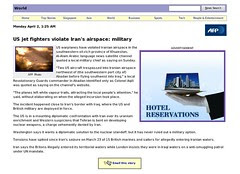 There have been a slew of weird news today. It all started early this morning when I read several news items that were quite fantastic. The best thing about the articles was that they were believable. However, something kept naggng at me and then I realised that it was April 1 today. Haha.

However, this news item comes from Agence France Presse (AFP). It is the French newswire. I doubt that they would be playing a joke like this and the date on the article indicates that it was filed on April 2. So, I guess that it's probably fairly legit.

The news article claims that two US jets have violated Iran's airspace. According to reports: "Two US aircraft trespassed into Iranian airspace northwest of (the southwestern port city of) Abadan before flying southwest into Iraq, The planes left white vapour trails, attracting the local people's attention."

The only question then, is the reason for such an incursion. According to rumours, the US is building up for an attack on Iran in early April. So, this is either a mistake by two American pilots or it might be some sort of reconnaissance mission as a part of attack preparations.

I guess that we will not know until later. I personally do not want to see another region go to war in the middle east. However, I don't really know how to view such a violation. But then again, I'm neither a political nor military analyst. Everything that I think or say is pure conjecture. We will find out if any of the rumours are true or not, soon enough.