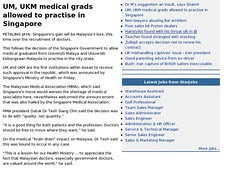 The Sporean government has decided to allow medical graduates from MU and UKM to practice within the city-state. They are the first two ASEAN universities to received such an approval from the republic. I wonder how this will affect the situation in Malaysia.

The Malaysian Medical Association (MMA) hails this as a good move but at the same time warns that there will be a 'brain drain' as doctors move down south to make more money. They hinted that doctors are being treated poorly within the country (especially government doctors) and the government should realise that the doctors are mobile.

The Sporean Medical Association (SMA) also described it as a good move as they realise that there is a lot of talent from our country. They are also experiencing a shortage of qualified medical staff, just like any other country in the world, including Malaysia.

However, I sometimes wonder if any doctors will really move down to Spore to set up their practices there. To me, it doesn't seem to have any significant advantages to doing so. Presently, a lot of specialist doctors are setting up shop in Johor Bahru (JB) and there are a surprising number of Sporean citizens who come up to JB for medical reasons.

By setting up in JB, they incur a lower capital cost and operating overhead while still being able to cater to their Sporean patients who come over the border to get cheaper medical treatment. If they choose to set up shop in Spore instead, they would lose all their advantages. So, I don't really see a reason in doing so.

However, there would be a reason for doctors, who get attached to Sporean hospitals and practices, to move down as the pay would be better there. This would once again, mainly affect the specialists only. I'm sure that they aren't really interested in hiring Msian GPs down in Spore. So, I don't see a massive brain drain problem happening.

What the article clearly illustrates is that only the medical degrees from these two universities are of any use. If you're a doctor from UPM, you're out of luck. No one outside of Malaysia will want you. However, this is again nothing new, as this has always been the situation for many years. In otherwords, this whole news is non-news as it doesn't say anything new.