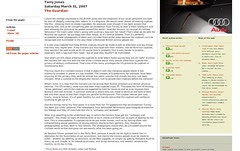 This article in TheGuardian is so absolutely funny. I'm starting to think that TheGuardian is the only newspaper worth reading. The link to the original article is at the bottom of this blog. I think that it's a very British thing to be able to write a sarcastic article like this. It takes some humour and intelligence to understand it.

The Iranians are so obviously uncivilised in their treatment of people held against their will. It is outrageous that these people are allowed to smoke cigarettes, eat plenty of good food, speak to the media, write letters home and be swiftly charged in court. This is just too inhumane and humiliating for these soldiers. The Iranians should learn how to treat soldiers held against their will from the civilised nations of the west.

In the rest of the civilised world, these people would be bagged, have their mouths duct taped, allowed the privacy of solitary confinement, given rigourous physical exercise by maintaining stress positions, be held without charges for at least five years, and be photographed in compromising sexual positions or having electric shocks to their genitals. That's how a civilised nation is supposed to treat people held against their will.

No wonder the Prime Minister is outraged. These people are so obviously being mistreated that he cannot stand the humiliation. The Iranians obviously need to be taught proper human rights and how to treat people in a civilised manner. So, they need to be punished with more sanctions and taught democratic western values like their two neighbours.

Alternatively, the British government could take a page from the Australian government, which has recently gotten one of it's citizens out of Gitmo. As part of the plea deal, the prisoner is sentenced to 9 months of prison in Australia after being held for five years without charges. On top of that, he has to give up his rights to sell his story. Any money made from it belongs to the Australian government, which worked so tirelessly to secure his quick release.