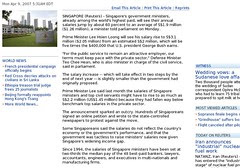 At times, I have to wonder if what's being done in S'pore is a good thing. Everyone knows that they pay their ministers extremely well. However, one has to wonder if this is a good or bad thing.

Another common reason that is used to justify the pay is to reduce corruption in the government. Granted, if a S'porean minister is paid so well, it would be more difficult to bribe them. However, this doesn't mean that you cannot bribe them, since their prime motivation is money anyway. It will just cost a little more. In addition, being a minister already gives them power. Now being a well paid minister will give them even more power. All this power is bound to corrupt a person sooner or later. The balance is then heavily tipped on the side of the government.

Another problem that comes from this is raised by the article. S'pore is increasingly becoming a country where the elite few [Read: One family - Ed] are really exploiting the rest of the population for their own means. This does not create a stable society. If the government really wants to attract more people to the civil service, they should raise the pay for *all* civil servants, and not just the ministers. Raising just the pay for the ministers smells just a little corrupt to me.