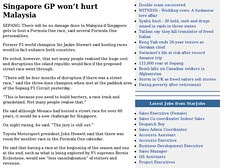 When I first heard about this, I wondered what was Spore up to. We've all seen a gradual migration of European GPs to other parts of the world, including the US and Asia. However, this new idea from S'pore reflects their mentality of constantly spoiling the rice bowl of their neighbours. It doesn't make any sense at all for them to hold a F1 GP.

Malaysia is currently the only South East Asian nation hosting an F1 GP. With only a limited number of GP races in a year, the various venues have to compete for the rights to host a GP. With Spore trying to host another GP, the worry is that it will compete with the Malaysian GP and split the fans. If the numbers drop, the venue will be dropped, which will result in a huge loss for us. That's probably why our dear PM was talking with Bernie Ecclestone this last weekend. He was probably trying to secure our GP rights for the near future.

Furthermore, when bidding for the F1, the two countries will have to come up with a differentiating factor. In the past, the Malaysian GP had always been sold as the 'hottest' GP in the series because of our extremely hot and humid climate. It is a challenge for both man and machine to survive the GP. The Malaysian GP is known as a race of attrition. That's probably why S'pore came up with the idea of a Night GP, to make up for the time zone difference between Asia and Europe, while providing a differentiating factor. However, whether it's safe enough to race 350km/h cars at night is another matter.

Then, I thought about venue. Our little island neighbour has hardly any land for building homes, much less a GP venue. But then, I remembered another GP that is held on a little island, Monaco. It is a street race, with the racing done on normal roads. S'pore could do this too. However, according to the F1 organisers, it would cause severe disruption to normal traffic as the roads would have to be closed months ahead for resurfacing and other engineering works. I wonder how the S'porean people will take this.

Then, I wondered about the motivation. S'pore doesn't have any oil and gas industry. It doesn't house any automobile industry either. So, there would be little reason for them to get involved at this level. The only industry that could benefit from a S'porean F1 is the tourism industry. So, that's probably their whole plan. However, if the Malaysian and S'porean F1 were to be held back-to-back, the fans would be split between the two countries. That's probably why we proposed that Malaysia holds the start of the leg while S'pore hold the end of the leg. However, the organisers don't seem to like this idea.

So, I don't know how this could work out to be a win-win situation for everyone. Chances are, with two GPs so close to each other, only one will be chosen. For an example, we would just need to look at the various European GPs. Well, I don't blame S'pore for trying to make some money, however, it's just not nice to do it at the expense of your neighbours. Well, with the fiasco that they've caused in Thailand, I guess nothing is out of the question.

haha. they could build thr race track around the island. or build it on Sentosa :P but why a night grand prix? spore can be a litttle silly at times...

a night grand prix will be watched by people in europe during the day.. plus, it's a *differentiating* factor from every other grand prix..