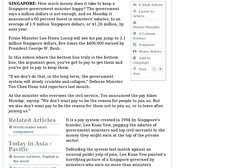 It seems that this pay hike has made massive international news. And it seems that the normal S'porean isn't very happy with the decision. There are complaints that this salary rise is too much. The article quotes a bunch of comments by Lee Kuan Yew in support of the hike.

He claims that this is the way to retain the top talent. He threatens the people of S'pore by painting a horrifying picture of a S'pore goverend by ministers who earn regular salaries. He says that "Your apartment will be worth a fraction of what it is, your jobs will be in peril, your security will be at risk and our women will become maids in other people's countries." I have never agreed to using fear, uncertainty and doubt as weapons agains people. So, the fact that he is spreading FUD in order to reinforce his view, just means that there is no other rational reason to do so. Want to know where FUD brings us, just look at Iraq.

He goes to suggest that he could have been a top lawyer in S'pore and so people like him should be paid a similar amount to compensate for the sacrifice that they make being ministers instead of top professionals. If that's the case, I suggest that he should just go be a lawyer. Let the people who honestly have a love for the country and who are willing to put their lives on the line to be the Prime Minister. If he really wanted to be a lawyer, just go be a lawyer. Suggesting that what he did was a sacrifice and that the S'porean people should pay for it, is just insulting the amount of self sacrifice that the rest of the population had to make in order to follow through on his plans. It's not like he built S'pore single-handedly. The people supported him by working hard and diligently towards achieving a common goal.

He also suggests that they run the government like a corporation and pay their people in the same way. However, he doesn't realise that they're not a corporation. The ministers are elected officials. In that sense, they already carry the trust of the people. And if he really wants to do this like a corporation, then, pay rises (especially for the CEO) must be approved by the board, which is made up of the stake holders. In the case of a government, the stake holders are the citizens. So, put the pay rise in a referendum and get the people to vote on it. If the people agree with the pay rise, I'm sure that no one will complain. It's this type of uni-lateral decision making that defines corruption in a developed country.

There are checks and balances in corporations and governments for a purpose. They are designed to prevent abuse of power like this. If they want a pay rise, they should ask the people, who will end up shouldering the added cost. Someone has to pay for the increase. Incidentally, according to the article, as Minister Mentor, he gets paid 2.7 million. I'm sure that his intentions are entirely noble and impartial.