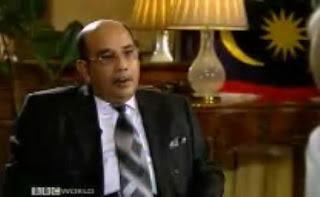 I've recently watched a programme from the Beeb, HardTalk. To those who're not familiar with it, it is a hard-hitting programme that invites important people in this world to discuss difficult issues. The hosts like to hit their guests with hard questions and it's interesting for the viewers to see how they react. In this particular episode, our Foreign Minister (FM) was asked about the problems of race, in Malaysia.

As expected, he tended to side-step the questions raised by talking about the past. He explained why the policies that are in place, are there in the first place. But when he was asked by the host, why it was that it's easier for Malays to get into universities than non-Malays, he said that it was not true. According to him, there are actually more non-Malays than Malays in local universities. This struck me as rather odd, as I came from a university where only 10% of the student population is non-Bumi. Heck, one of our top universities in the country even classified it's local Chinese and Indian students as foreign students at one time. When they corrected this boo-boo, it dropped them from a Top 100 rank to relative obscurity within a year.

Throughout most of the interview, he gave the sense that we are a nation in denial. As has been the preferred method in recent years, he began to attack the fact that outsiders have no right to comment on the situation within, especially if the people themselves accepted it. While I agree that strangers to a situation, should not comment too much on the situations that they may not know much about, I think that it's delusional misinformed to think that the people themselves are happy with the present arrangement.

"I don't think it is right to look at Malaysia as a racist country." -- best quote of the show.

Of course the country itself is not racist. It's merely the present administration, with it's continued propagation of racial preference policies that can be considered as such. When asked about how the country has become divided, with each community sticking to themselves, he continued to deflect the situation. He recognised the fact that it was happening, but he doesn't wish to address the issue. He merely states that polarisation is getting worse everywhere in the world. And, our government has taken steps to tackle the situation.

According to our FM, Lina Joy was never barred from converting to Christianity. What she was stopped from doing was to convert her name. WTF??!! And he considers this issue a minor issue as he claims that there are more important things for the government to handle than this. He stresses the point that Islam is like a club. When you want to leave the club, you have to follow the rules and procedures of the club. I'm not sure which club requires people to spend 6 months in a detention rehabilitation camp before leaving but whichever club it is, I'm sure it is illegal to do so.

Oh yea, the old dude is coming to Cambridge to give a talk this Friday. I'm going to attend, with my camera. Hopefully, I'll get a few nice photos of the event. I'll try my very best to keep my mouth shut throughout the event.

You wrote "According to him, there are actually more Malays than non-Malays in local universities"

Are you sure you wanted to write that?