What's our government been sniffing? 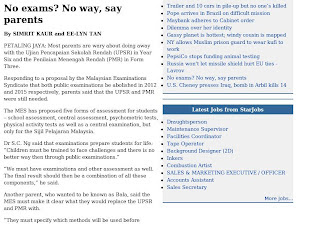 When I first read that the Malaysian Examinations Syndicate (MES) is proposing to abolish both UPSR and PMR, I didn't think too much of it. After all, almost everyone gets through these exams and move on until SPM as long as they do not drop out of school.

So, abolishing them isn't going to affect the students directly. The MES can save money from hiring examiners, plus it would hopefully make it easier to mark SPM and STPM papers as they would no longer have to deal with the hassle of these two exams. However, we cannot just do away with it without coming up with a plan for replacing it with something better. And when I read their ideas, I just started laughing. The MES is proposing an all round assessment for students. It would include school assessment, central assessment, psychometric tests, physical activity and central examinations. We've already got them all today, except for the psychometric tests.

So, I started wondering what the MES must've been sniffing recently. I would certainly not want anyone's life to hinge on the results of a psychometric test. According to wikipedia:

"Psychometrics is the field of study concerned with the theory and technique of educational and psychological measurement, which includes the measurement of knowledge, abilities, attitudes, and personality traits."

Wonderful. The only new thing that psychometric tests bring to the mix is personality traits. The other tests already cover the rest. So now, the government plans to grade us on our personalities. Sounds extremely Orwellian to me. I wonder what kinds of personalities would be judged as 1A. I'm fairly certain that I would fail such a test, as I usually just randomly answer psychometric tests anyway.

It is a good sign that the people working in the MES realise that our education system needs some revamping. However, they should really think things through before announcing half-assed ideas like this to the public. National examinations should only assess things that are patently quantifiable. Leave the fuzzy stuff out of it. A person's future should hang on the hinge of an obscure and esoteric psychological test.