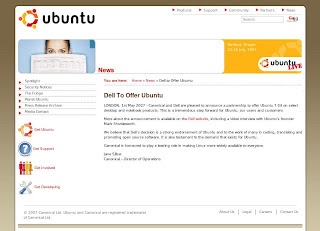 It's official now. They news has just been announced, literally minutes ago. Both Dell and Ubuntu have released official confirmation. They have finalised a formal partnership to offer Ubuntu on Dell select lines of desktop and notebook products.

However, as Mark Shuttleworth says, one of the biggest barriers for Linux adoption is the support of various hardware. The problem is that a lot of hardware companies do not provide driver support for Linux. Therefore, the Linux community has had to write it's own drivers to support various hardware. This doesn't mean that it's drivers are not good. In fact, some of it's drivers are so good that others copy it. The recent fiasco of the bcm43xx driver for Broadcom wireless cards is just such an example.

So, the Dell website goes into further details and the most important bit it mentions is:

"Dell updated its policy on driver support of new Linux desktop and notebook products to use open source drivers in kernel.org where possible."

That statement is important for several reasons. It means that Dell is now committed to using open source drivers instead of proprietary ones. This means that hardware vendors will have to write open source drivers instead of closed source ones. If their products are not supported by open source drivers, they will not be used inside these Dell machines. With Dell sales volumes (they are the world's second largest PC vendor) as a driving force, this will just mean that hardware vendors will have to start supporting alternative OSes right alongside Windows.

It doesn't surprise me that Ubuntu was chosen as Dell's distro of choice. Michael Dell himself uses Ubuntu at home. So, it makes sense that his own personal distro was chosen on top of others. The fact that Ubuntu is currently the world's #1 distro is also important. Dell sells computers to the masses. So, it should choose a distro that is most used by the masses.

Personally for me, this announcement just makes it more likely for me to buy a Dell for my next machine. The reason is simply to save time. With other vendors, I would have to check for detailed tech spec and look up the machines for Linux hardware support. Then, I would need to spend some time installing and configuring Linux on my new laptop. I would be able to save on all this time and headache with Dell. Now, if only they sold a good looking notebook like Apple. I wonder if they'd be supporting Linux on the Alienware line of notebooks too. That would be perfect!

UPDATE@2210: Judging from the responses that they've gotten on their official blog, Dell has just picked up a bunch of new customers. I also seriously considering them now, when before, they weren't even on the list.

can we obtain this version of ubuntu too??? or is it somewhat patented by dell?

if you're talking about the special effects, it's beryl/compiz..

it would not only be stupid but also quite illegal for dell to patent linux, or parts of it..