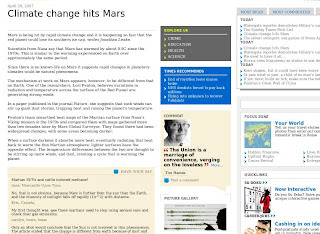 I always find the issue of climate change a little contentious. Furthermore, it is currently being politicised so much that you cannot tune into any western politics without hearing the words climate change uttered. As an engineer, I do not dispute the facts that climate change is happening. However, I have never been quite convinced with the conclusions.

I've blogged about this issue many times and I don't wish to add much else except that scientists have recently discovered that Mars is undergoing a similar amount of climate change as us. According to this article, scientists from NASA say that Mars has warmed by about 0.5C since the 1970s, which is similar to the warming experienced on Earth over approximately the same period. So, I'm curious to see what the politico-pseudo-science environmentalists have to say about that. Let's re-examine the arguments.

Firstly, this discovery leads the the question of whether or not humans are responsible for climate change or is it just a natural part of the planet's cycle. The people who say that we are responsible like to quote carbon dioxide emissions and other green house gases as the cause for climate change. They blame us for polluting the environment and causing it to warm up. They like to show scary graphs with inconceivable extrapolations that illustrate how the warming cycle has accelerated in recent decades. So, I guess that we'll just have to blame the martians for the climate change on Mars then. Regression isn't science, it's statistics.

Secondly, this brings into the question of what should we do about the issue. As our planet gets warmer, life on the planet will certainly be affected. However, it isn't very clear whether we should take action to correct this phenomenon or should we develop methods to adapt to this change. However, choosing the latter isn't quite as sexy as claiming that the end of the world is coming and we're all doomed unless we splurge billions of dollars on every hopeless endeavour. This is fundamentally the most important issue because if we aren't the cause for climate change, we might not be able to do much to alter it's course. Unfortunately, big money goes to sexy projects and politicians like to look sexy as well.

So, I find it a bit sad that we do not have the best information to help guide our decisions. It is ultimately a failure of science to come up with the information we need. We can blame the politicians for turning this into a huge emotional issue. However, we have no one but ourselves to blame for not coming up with accurate conclusions. Maybe it's better to spend more money in learning more about our planet and the environment. Hopefully, we can figure out what to do then.