Malaysian government does a Microsoft 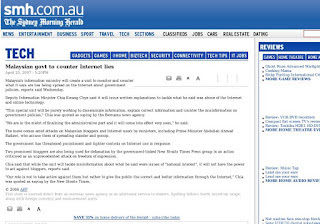 I'm blogging about this as the news has been picked up by other technology news sites. According to the article, our government will be setting up a special unit to monitor and counter 'lies' being spread on the Internet about government policies.

I like this particular quote from TheInquirer, which says:

"There is currently a bit of a barny going on online, between the Prime Minister Abdullah Ahmad Badawi and Malaysian bloggers and other Internet users. He says they are spreading slander and gossip, they say he is... not a very good PM. Miffing a Malaysian PM is apparently enough for the entire government to talk about punishment and tighter controls on Internet use in response."

That put me in stitches. You can always count on the Brits to come up with such concise and accurate descriptions of a problem, while using a comical language. I think that it's very funny. I could never better than particular quote. So, I won't even bother trying. However, since this is about technology, how is this related to Microsoft anyway?

Well, to put things simply: Microsoft tried to do something like this several months ago. They had come to receive a lot of bad publicity about Microsoft (virus attacks, product delays, defecting executives and other news). So, to counter that, they paid some of the media bloggers off, to put a positive 'spin' to all their news. Then, they set these people loose on the Internet to sow their positive 'seeds'.

It painfully backfired when people found out about it. The bloggers who were involved got discredited and everyone else went on a rampage to attack Microsoft for using such back-handed tactics. Although it shouldn't have surprised anyone, it still made a lot of people angry. So, Microsoft has learned it's lesson. You cannot get really buy good publicity. I wonder how it would work out with the Malaysian government instead.

I'd wager that it won't make much of a difference. As it is, the mainstream Malaysian media are mainly mouth pieces for the government. As a result, it has sparked an online revolution within Malaysia to bring real news to light without going through censorship. It is one thing to try to counter bad things being said about you by other people. It is quite another thing to counter things said about you by your own people. This is the bit that the government hasn't really understood yet.