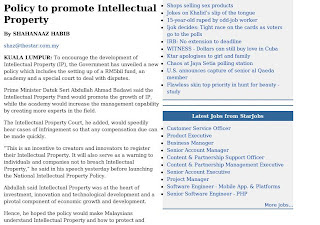 This blog comes from a personal bias towards intellectual property (IP). I personally believe in and respect intellectual property. My Asian friends call me weird because I'm one of those people, that you've heard of but rarely met before, who actually buys original stuff. So, that's why I find this article a little interesting.

Intellectual property law generally revolves around trademark, copyright, and patent law. The spirit behind these laws is to protect someone's creative work from being misused by other people. The logic is that when people are able to exploit their creative work, it will encourage more people to invent useful stuff and make money out of their own inventions. I shan't go into a discourse about how intellectual property isn't actually property per-se but we'll just accept that when you talk about IP, these laws are involved.

However, just like any other law, there's also an uglier side to it. Today, we have a situation whereby these laws are working to stifle creativity instead of stimulating it (lawyers have to make a buck). Put simply, creative juices flow when there is freedom to exchange ideas and do things. It is true that creativity should be properly managed. However, laws are designed to be restrictive as it defines boundaries and tells people what they cannot do (this is particularly true for patent law, but also applies equally to trademark and copyright law). This is counter to the nature of creativity.

So, when I see that our government is spending RM 5billion to set up a national IP policy, establish an academy and institute a special court to deal with disputes, it just doesn't quite gel with me. With that much money, we should be building a richer environment with more freedoms, and not building artificial boundaries around creativity. As a developer of real world IP, I am discouraged by the fact that so much money is being spent on lawyers rather than artists or engineers (the actual people who do the creative work). This is just so typical.

The money could be better spent trying to stimulate creativity by:

PS: Incidentally, if restrictive IP laws were present 2000 years ago, we wouldn't have Christianity nor Islam today. Everyone would be a buddhist. In case it isn't clear, I am not a lawyer.