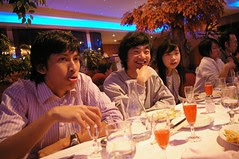 Where better to start, than at the beginning. After the havoc with Eurostar on the previous day, we were set and ready to go to travel to Paris on Sunday. We were all looking forward to getting there after sitting around waiting for a whole day.

We ended up taking the 10am Eurostar to Paris. So, those of us who were left in Cambridge, woke up early on Sunday to catch the 6am coach to Victoria. From there, we made our way to Waterloo and caught up with the rest of the group there. I was fairly surprised with the Eurostar check-in process. It was fairly similar to flying. Baggages were scanned and passports were stamped. Then, we were on our way.

After arriving at Gare du Nord, we got some lunch at a random restaurant in the area. Then, we caught up with the people who took a later train than us. After that, we got some Metro tickets and were on our way to Antony with the RER B. Everything went smoothly.

On arrival at Antony, we were greeted by some of our host students. Then, a whole bunch of them came down to help us with our luggage. They helped the girls lug their luggage up the 15 minute walk to Ecole Centrale. We were quite surprised that the hosts were mainly international students, just like our group.

After reaching Ecole Centrale, there were some complications with our accommodations. The original plan had us bunking with our hosts. Some of our girls had problems with the idea of bunking with random guys. However, the administration was against us double bunking in a room and we ended up getting some guest rooms instead.

As we had a little bit of time to spare, the students brought us to the nearby Parc de Sceaux, which was made for the King. I have to say that the parks in France are all very nice. They are all very symmetrical and have nicely trimmed hedges and trees. One funny thing that I noticed was signs along the pond warning people of thin ice, when the water wasn't frozen at all.

After the walk, we were treated to a nice Chinese buffet at a nearby restaurant. It was the best food that I've had in a long time. Even the Chinese restaurants in France have better food than the ones here. I had loads of 'siew mai' and 'har gao' as well as lots of other good dishes. According to our hosts, it was paid for by their budget. However, we saw each of them paying EUR 15 extra for each of us. Until now, we're still not sure if the students paid for our dinner or not.

Finally, we retired to our rooms and got ready for our second day. We were all just glad that we finally made it to Paris and that we had very nice people as our hosts. It was a good start to the holiday.