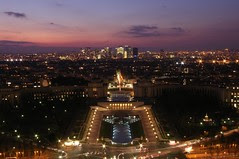 I got home from Paris last night. It was a very fun trip overall, although there were some complications along the way. I got to learn about many interesting things that I wouldn't have, if I had not gone on this trip.

Over the next few days, I will be blogging in detail about each day. But for now, I will first give a summary of the trip. It started of with a minor shocker, when I met my supervisor on the trip as well. I didn't realise that he was going on the Paris trip. It was not only awkward for me, but also for a lot of the other students as they mostly knew him as well. Interesting.

We were paired up with engineering students from the Ecole Centrale Paris, which is one of the best engineering schools in France. And with engineering being one of the top course choices for an education, these students are supposedly the cream of the crop. However, just like us, they were mainly made up of foreign students, which was perfectly fine. I never did manage to discover who my 'host' was, but it didn't really matter.

Throughout the week, we visited many companies. Some of the companies we visited were of such high security that some of us, who forgot to bring passports along, were not allowed in. It was a very interesting tour though, as we got to learn a lot about some defence technologies and JiaHui seemed particularly excited about them.

We managed to cover most of the major tourist spots, on our own, in the afternoon and evenings. We typically got home at around 1am or so for a quick shower and then some needed sleep before getting up again the next morning for another company visit. So, I had spent most of today recharging my batteries.

*** image of trocadero from eiffel tower in the evening ***