State of the Federation 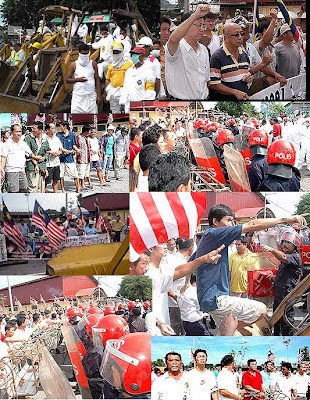 I'll sum up the interesting things in TheStar today, on things happening in our beloved country, Malaysia.

SMART Tunnel Test
It seems, that after all the insistence by our Works Minister that we aren't going to test the SMART tunnel before commissioning, it had finally received a real-life test recently. However, the test is fairly useless from an engineering standpoint as it only shows that our billion ringgit longkang (drain) works.

As all engineers know, we need to stress test it so that we have an idea of it's limitations. There's no point proving that it can divert water away from the city centre if we do not know the maximum volume that it can handle and how much time it'll take to set it up. They took 1 hour to clear the tunnel of traffic before opening it up. In a flash flood, the whole KL could already be flooded in that time.

Independent Bumiputras
Our DPM has expressed that he would hope that a day will come when bumiputras will no longer need privileges from the Government. Personally, I think that it's just political talk. I guess that our DPM is trying to score points with both the bumis and non-bumis by taking the centre. His statement merely makes an empty promise to the people who would like to see the privileges gone, and tells the people who want them to stay, that it's still business as usual.

But he did say something I found interesting. He claims that "the Government has been giving out JPA scholarships to more deserving non-bumiputras as we feel that non-deserving bumiputras that get help were wasting our money and time." Well, I'm not sure how significant an increase it has been but I wonder if it was necessary to take a racial stance to educational scholarships in the first place.

Pig Issue
Yea, I was surprised too, when I woke up this morning to find this issue splashed across the news. For some reason, the pigs are being forcibly culled by order of the Melaka State Government. Some alternative news sites have pictures of the stand-off between the farmers and the FRU units. According to the article, "the directive was aimed at reducing environmental pollution, particularly river pollution, as the farms were too close to rivers."

This doesn't make any sense to me. If it was truly an environmental issue, there are many other ways to handle it besides forced culling. They could provide tax incentives or encourage the use of green technology. That is the way it's normally done anyway. You don't forcibly cull almost 100,000 pigs over a fortnight for "environmental" reasons, especially when the pigs aren't inflicted with any disease.