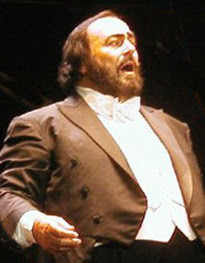 What can I say. He has an other-worldly voice. He passed away today and the BBC has been running short clips of his songs. I have to say that I've never really bothered to listen to him before this as Italian opera isn't quite my thing.

But for some reason, when I heard him on the BBC today, tears came to my eyes. It's not that I'm sad, I'm not. It's just that, I cannot possibly imagine anyone having a voice like his. It's too beautiful.

I told my friend that it's so beautiful that it's "not human". But, my friend corrected me. She said that his voice is probably "too human". I'm starting to agree. I think that his voice was too human, with too much passion and emotion in it.

Now, I wish that I had listened to him in person, during his prime. I know that was definitely not possible as I would not have been able to afford a ticket. I guess that the next best thing will just have to do. I need to find some of his albums. Hopefully, they'll be selling some of the older ones for cheap.

PS: His body has just arrived in Modena, Italy. The whole thing is being carried Live on BBC. His body will be lying in state at the cathedral till the funeral this weekend and the mayor is encouraging people to come pay their final respects. It seems that Italy might be given a state funeral. Kheng!

PPS: I really need to go catch a REAL Italian opera before I leave Europe.