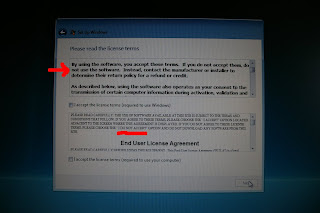 I have been trying to get a Windows refund ever since I got my new notebook. I am perfectly happy with the new notebook. But, I just didn't want to have anything to do with the Windows Vista that came pre-installed. So, I did what was asked for in the "End User License Agreement" (EULA). You can see a copy of the EULA in the photo on the right. I took the photograph with my DSLR camera.

The whole saga started the Monday after I had received the notebook. I proceeded to try to contact HP on a possible refund. This was the first obstacle that I had to cross. For some reason, I was unable to contact Customer Service through the HP (UK) website as my notebook model (6715b) wasn't listed in the menu. It was available on the technical support menu though. Therefore, I used that form instead.

Then, after a couple of days, I received a phone call from the HP technical support. The person whom I spoke to, told me that they were unable to issue me a refund. He had consulted his supervisors and that's what he had been told. Then I quoted the EULA terms to him. In the end, he told me that they (technical support) are unable to handle my case. However, he will escalate it to Customer Service.

Next, after a few more days, I got an email from a HP Customer Service representative. She told me that although I didn't want the Vista provided, HP was unable to provide me with a refund. She asked me to contact Microsoft directly and get my refund from them. So, I went to the Microsoft website and described my situation to them.

Following that, I was contacted by a Microsoft Customer Service representative. He told me that Microsoft was unable to give me a refund directly as they do not deal with end-users. He recommended that I get in touch with HP instead as they would be able to issue me with a refund. I told him that, as I had already described in my original email, I was told to contact Microsoft by HP. I had even included the original conversation between HP and myself, in the original email.

Then, he told me that he couldn't do anything but he had escalated this issue to higher powers within Microsoft. He promised me that they will get in touch with me shortly. I've been waiting for a reply ever since. I told all of them that I didn't want the Microsoft Windows Vista Business that came with my notebook. I had declined the EULA and I want my refund. 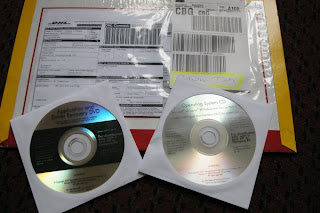 Finally, I received this package in today's mail. It contained original HP discs for Windows XP SP2. I feel exasperated. I'm not even sure who sent me the discs. I'm assuming that they came from HP as these were HP OEM Windows XP Professional CDs. Somewhere along the line, the wires must have gotten crossed. They must have assumed that I had wanted XP instead of Vista! While I'm sure that there are plenty of customers requesting a downgrade of their Windows OS, I'm not one of them. But I guess that from HP's point-of-view, this issue is resolved with another customer satisfied.

I'm not sure if I should press this matter further. It's fairly obvious that my consumer rights are being violated. I had merely tried to follow the terms set out in the EULA but I have been denied the opportunity to do so. Both HP and Microsoft are merely giving me the push-around. I hate being pushed around.

Well, I will wait until I hear something back from the Microsoft representative. Then, I will decide whether or not it's worth my time file a formal complaint with the local Office of Fair Trading. The refund is probably worth less than £50. I'm not even sure if it's worth my time to file an official complaint. Alternatively, I might try to sell off the official CDs instead and see if I can get any money for it. If anyone wants to buy them off me, just email me.

I wonder if there are some sort of 'purchase agreement' or small print which states that you'll HAVE TO ACCEPT Vista as part of the package. But this clearly contradicts with Vista's EULA. The question is who has greater authority, the question which always surface whenever a legal document is written in different languages where one of the languages are deemed authoritative.

By the way, I think selling of your Vista to someone else also violates the 'new computer' version of EULA?

heh, there's no such thing as HAVE TO ACCEPT. If there was, it is certainly against the law. I don't HAVE TO accept anything. As for selling the CDs, I doubt that it's against the law. You can buy it from Amazon.