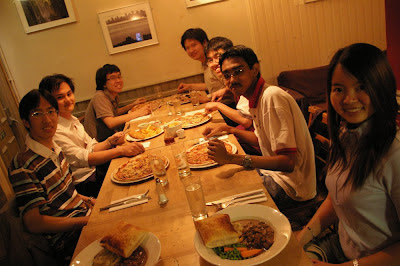 Today is Kuhan's birthday. So, yesterday evening, a whole bunch of us ended up having dinner with him. We went to the "Fountain Inn" in Cambridge as Eugene found a 20% discount coupon for a dinner party of 8. It's located right next to Charlie Chan and it's a pub. So, it had all the standard pub fare. I had a steak and ale pie on XinYi's recommendation. The rest of the guys all ended up ordering pizzas.

After dinner, we (minus xinyi) had planned on going to the Magdalene games room to play some air-hockey. But we ended up in my room watching short videos on tricked out cars instead and talking about all kinds of nonsense. It'll be her birthday next weekend. So, we will probably be going out for a meal somewhere else instead. The food here was acceptable but not excellent.

UPDATE@1300: The most interesting part was that on our way back, as we were walking through town, we witnessed the police chasing a guy down and arresting him for carrying a concealed weapon. The police held out pepper sprays and had their retractable batons out. They shouted at the guy and got him to stick his hands up in the air. Then, they read him his rights and caught him. Very exciting!

it's a lens artifact.. cause of the angle the light had to come in.. you were quite close to the camera and at a wide angle..