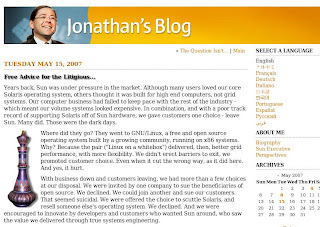 Steve Ballmer's outburst yesterday that Microsoft can kill Linux with it's patents has generated a lot of furor in the technology world. Through all these responses, one stands out. On his own personal blog, Sun's Jonathan Schwartz gave some friendly advice to Microsoft that is to learn from Sun's own mistakes and not repeat them.

Although Sun's story isn't quite as clean as is described in the blog, is mostly there. At one time, they had bragging rights as being the dot in dotcom (as everyone was running a Sun) but when the bubble burst, Sun's business suffered when it's customers went bust overnight. A lot of their Unix business went over to Linux. So, they had to adapt quickly or perish.

"We were invited by one company to sue the beneficiaries of open source. We declined. We could join another and sue our customers. That seemed suicidal. We were offered the choice to scuttle Solaris, and resell someone else's operating system. We declined. And we were encouraged to innovate by developers and customers who wanted Sun around, who saw the value we delivered through true systems engineering. So we took that advice."

In essence, Sun decided to innovate, not litigate. As a result, Sun's contributions to open source are in excess of 25% of all the lines of code within a Linux distro. They are a key driving force behind the Open Document Format (ODF), which is championed by everyone else but Microsoft. They have distributed 8 million Solaris licenses after building up the OpenSolaris community. Java has become a standard on it's own and it's distributed under the GPL. Most importantly, Sun had opened up it's UltraSPARC microprocessor designs (under GPL) and has led to an increase in returns.

"All of which is to say - no amount of fear can stop the rise of free media, or free software (they are the same, after all). The community is vastly more innovative and powerful than a single company. And you will never turn back the clock on elementary school students and developing economies and aid agencies and fledgling universities - or the Fortune 500 - that have found value in the wisdom of the open source community. Open standards and open source software are literally changing the face of the planet - creating opportunity wherever the network can reach. That's not a genie any litigator I know can put back in a bottle."

That quote sums up why proprietary systems are dead. Microsoft doesn't have any control over the developing world, nor can it sue the Fortune 500 companies supporting Linux (who are themselves, Microsoft's largest customers). Microsoft must also adapt, or it will perish. Like Sun, it needs to start innovating again. It was once a great tech company. All this copying of other people's products isn't going to help it convince people of it's patent claims.