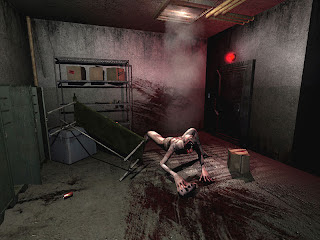 While we're on the subject of games, I came across news of another much hyped and awaited indie game release. Penumbra Overture is billed as "one of the best, if not the best, horror games to make its way to your harddrive," by GameSpy.

Hmm, I've come to realise that I've started to pay more attention to the indie gaming scene more than the main stream ones. I guess it's just like music, some people prefer the independent labels as there is more creativity there. The smaller companies are able to take risks as they have nothing to lose. They will never be able to compete with the mainstream companies on their terms. So, they'll have to come up with something totally different in order to be able to get any market share.

Another reason why I'm focused on indie game houses is because of their focus on Linux. It is not difficult to develop cross-platform games. Anyone who tells you otherwise is a troll. I used to write cross-platform applications in the past. It's just a matter of picking out the correct libraries to use. The fact that small companies without a budget are capable of producing games for non-Windows machines just tells you that the companies that are making pure Windows games are just plain stupid and spreading FUD.

It doesn't cost anything extra to write a cross platform game. All it takes is to re-compile the games for the different platforms. For the main game library, they can use SDL. For graphics, use OpenGL, which is what Direct3D is trying to imitate. For audio, use OpenAL, which has easy 3D sound support. TCP/IP for networking is portable anyway. Write the main game code in clean C/C++ without any OS specific hacks. Leave the OS specific hacks to a minimum in a single library. All the independent game houses know this. The major ones know it too. They just refuse to acknowledge it for some reason.

There are some mainstream companies that focus on all platforms. One example is Id, which releases Doom and Quake for all platforms at the same time. I was extremely disappointed with Atari for making NWN2 windows only. I felt that it was a bad decision, and it turned out that way. They did not realise that a huge number of their fan base actually used Linux. More precisely, almost all their independent community run worlds are using Linux. So, by shutting out Linux, they essentially shut out the very people at the heart of their fan base and supporting it. Not a very smart move.

If a company doesn't support my platform, I go to a competitor. I vote with my wallet. I bought NWN1, but I'm certainly not buying NWN2. That's the beauty of capitalism.

PS. The company behind Penumbra only has 4 people in it!