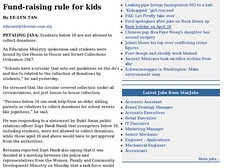 Wow, I never knew that there was such a law [just goes to show you how little I know of law]! It is illegal to make kids below 16 go around fund-raising. It's not only the schools that are doing this all the time but churches, temples and other religious organisations do it too.

I personally remember doing things like this all the time when I was a kid. It's quite popular for primary schools to organise an event, and get the school kids to go around raising funds for the event. A part of the funds would often go into a fund for building or maintaining some infrastructure. All proceeds are logged in a little card to create a paper trail for the money. It was fairly easy for the school to raise several thousand ringgit this way.

Then, for most secondary schools, the different uniform bodies will have 'flag day' collections. I used to be one of those pesky St. Johns kids going around bugging people for donations and handing out flag stickers to those who donated some money. During my year as the committee, we managed to raise more than RM 10,000 just by doing house-to-house collections. Most of this money went into our society funds, which got spent off by the useless committee the following year.

As for my temple it's fairly common to get the kids to collect some donations on Wesak day. The kids will be issued with little milo cans and sent round to ask people for donations. It is something that's done all the time. The funds would then be used for the sunday school that was run to teach kids about teachings of the Buddha.

Now, according to this article, all these things are illegal. So, it would seem that a lot of people had unknowingly broken the law. If this practice is discontinued, the schools would have to be even tighter on their budgets than before. Plus, the kids will not be able to enjoy the fun of going out and bugging people for money.

Some people may find this odd, but this is how things are done in Malaysia. The community around a school supports the school. As the funds are normally used for the good of the students, which are often from around the area, it only makes sense for everyone to chip in a little. This has become an essential way for the schools to supplement whatever funding that they may or may not receive from the government.