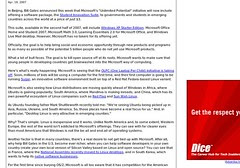 Microsoft has come up with an idea to battle the rising dominance of Linux. Bill Gates had recently announced the release of a new suite of Microsoft products that are available for only $3 in certain developing countries. A similar discount based system is already practiced in several places including Malaysia.

One of the worries for Microsoft is that it sees it's monopoly shrinking. This is especially true in emerging markets where it isn't entrenched at all. In much of Africa, Ubuntu Linux is popular. China has it's own Linux distro called Red Flag. With the upcoming OLPC project, many children will get their first experience using computers on Linux. Microsoft is worried that once people realise that you do not need Windows nor Office to accomplish real work, it will start to lose it's dominance.

However, it's idea to tackle the problem by making it's software cheaper isn't going to fly. The reason is simple. People do not make the conscious choice to move to Linux because it is free. Both Microsoft and Apple had approached the OLPC project with offers to give them the OS for free. However, they were both turned down simply because their system was proprietary. That's right, although most people have not completely realised this yet, but they are slowly waking up to the evils of proprietary technology.

So, when presented with a choice of a system that is cheap and proprietary versus a system that is free and open, any logical person would choose the free and open system. The advantages of a completely free and open system is just too numerous to list. The fact that it isn't burdened by any hidden taxes and allows the user the freedom to do what they want, is a big bonus. I find it impossible to understand the reasons anyone is willing to pay even $0.01 to be controlled by some random entity from halfway around the world.

It isn't price that Microsoft needs to compete with. It's the fact that the Windows platform is becoming increasingly more restrictive. People want to live free and happy. It's only natural that they'd like to enjoy freedom when using technology as well. Vista seeks to lock everything down with silly DRM. It forces it's users to upgrade their hardware (including display monitors) even though everything may still be working just fine. No one likes to be forced to do anything.

However, Microsoft also knows that it cannot possibly compete in an open marketplace. It's products are just too inferior to the other alternatives out there that it would not have any customers if it could not lock them down. Because of this, it's days are essentially numbered. The developing world will never buy into this form of foreign imperialism. It's also losing ground within it's entrenched markets to Linux daily.

Microsoft is trying to diversify it's business so that it may survive into the next generation. However, it's looking increasingly unlikely to succeed in any other markets. High profile products like Xbox360 and Zune are losing billions in the process of doing terribly against their competition. Microsoft just lacks the necessary skills and experience to compete in a market that they do not control. They will need to learn this fast in order to survive.

[P.S: Some economists should really study the technology marketplace. It's really quite interesting. Gives new meaning to the term 'free' market.]

UPDATE: Microsoft had tried this tactic before with a $3 Windows CE and failed miserably. Although it's a different market, the same reasoning applies. They're a bit blind to the real reasons why people don't choose Windows.