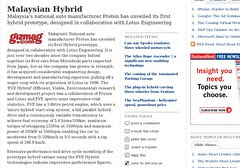 This is interesting news indeed. I'm not sure why I've not heard this in the Malaysian media yet but had to hear about it from a US news outlet. I would have expected the Malaysian government to be clamouring all over this. Maybe they just don't see the potential. I don't know.

Well, the news is about a Malaysian hybrid car. Our national car manufacturer, Proton, has recently produced a hybrid car engine, called the EVE (Efficient, Viable, Environmental) Hybrid. When I heard the name, I knew for certain that it was a Malaysian project, since the name is so cheesy. This engine was developed by teams from Proton and Lotus (a Proton subsidiary).

Further into the article, it described Proton's approach to low-cost hybrid car development. Instead of developing an entirely new hybrid car platform, Proton decided to use existing capabilities and develop an improvement on a standard car. That's fairly typical of Malaysian style innovation. So, the EVE Hybrid is actually based on a 1.6 litre Gen.2 car engine design. So, presumably, it would be trivial to pop this engine into a Gen.2.

Towards the end of the article, it claims that Proton is fairly ahead of the game when it comes to clean technology. Proton had also previously developed a bio-ethanol fuel based car engine. Although I personally do not believe in the advantages of using bio-ethanol (since it's actually fairly difficult to produce), it just shows that they have the idea and focus to work on green technologies.

So, what do I personally think about this development? I think that it's great. If Proton capitalises on this new engine and develops a new car that can be sold cheaply, I do believe that it's lagging sales problem would be solved. With the rising fuel prices in Malaysia, most people would be happy to drive a car the consumes less petrol. I would personally buy one if it is affordable.