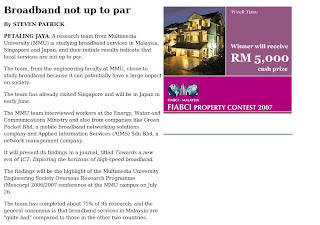 An article in TheStar today brings to light the fact that so-called 'broadband' in Malaysia isn't quite broad enough. This is a well known fact to anyone who actually uses the service. However, it's taken quite a while for someone to actually bring it to light.

The article based it's claim on a piece of research done by Multimedia University (MMU) on broadband in Malaysia, in relation to Singapore and Japan. Good thing that they didn't pit us against South Korea, which has fibre to the home. I agree with the choice of countries as we're trying to position ourselves as a regional ICT hub. So, we need to compete with other technologically advanced countries instead of constantly comparing ourselves to the likes of our less developed neighbours.

There are so many definitions of 'broadband' that it is often used by marketing people to confuse us. The ITU-T technical definition of broadband is 1.5Mbps. However, the OECD political definition of broadband is defined as 256kbps. In Malaysia, anything above 64kbps used to be marketed as broadband. This situation is quite sad. Another loophole that the ISP likes to use is 'best effort'. This means that a subscriber will never see the speeds that were promised.

The article goes to say that the main problem with broadband in Malaysia is the lack of trained personnel. This just makes me want to laugh. The article doesn't go into the specifics. However, I would like to share my personal experience with the 'service' that I had managed to get from our biggest monopoly, Telekom Bhd, and it's ISP, TMNet.

First, my journey into broadband started with a 1 year wait for it. When they first launched, I was glad to see that my home was located within a service area. So, I went to the local Kedai Telekom and applied for Streamyx (with a free modem) and a second telephone line. They promptly came to my home the very next day to install everything. However, for some reason, they couldn't get a broadband connection after trying for a couple of hours. That's when my nightmare started.

I was told over the next two weeks that they had problems with my line and they would fix it soon. After about a month, I was then told that all the ports in my area had been used up and I would have to wait till they upgraded the equipment before I could get my broadband. After more than a year, I was told that they could install the service for me and that's when I got my broadband. I wasn't alone in this nightmare though. All throughout the Klang Valley, there were shortages of network ports. As usual, things in Malaysia are good in the idea stage, but horrible in the implementation effort.

Second, after getting the connection, there were problems as well. For some reason, there was interference between the modem and my normal phone line. This resulted in my family being unable to clearly hear any conversations on the phone line. However, it wasn't that big of a problem as we all had mobile phones and received most of our calls that way. Even with the micro-filter installed, it wouldn't clear up. So, my house phone was turned into a pure data line.

The service was horribly intermittent as well. Fairly regularly, I would find that I was unable to connect to the Internet. This happened at least once a month. Whenever it happened, I would call up the TMNet help line to enquire about the problem. Each time, I would be given the same lame excuse. They would tell me that "server tengah reboot". They must have extremely incompetent people running their service as I had been a JARING user for many years before that and never had a problem with the connection.

Third, after coming to the UK, the only people who were using my broadband line were my parents, who would use it to check email and read my blog. I had set everything up so that it would work properly for them. However, my modem died after a while. So, I got my dad to go out and buy a new modem. As he didn't know how to install it, I asked him to call up the TMNet people to send someone over to help with the installation. They sent someone over after a while.

However, this 'technician', came to my home and plugged in his notebook computer into the network. Then, he showed my dad that there was a connection and that everything was working. However, he couldn't figure out how to setup my home computer with the necessary settings to connect. The excuse he gave was that "sekuriti terlalu tinggi". Besides an antivirus and personal firewall my dad's computer didn't have anything extra installed. Until this day, I have no idea what he meant by it.

So, I have to agree that our broadband service in Malaysia is sub-par. There aren't people who know how to build, deploy nor maintain the service. As for the other ISPs, they are often wireless broadband providers as Telekom owns all the copper. However, recent suggestions by the government to ban the use of the 3.5GHz spectrum will affect them terribly. The government wants to ban them (after issuing them the license) because of our other massive communications monopoly that controls satellite communications.