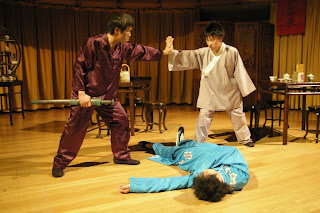 I went to watch a play by the Cambridge University Christian Drama Society last night. I went with a bunch of my first year friends. I was supposed to go the night before last, but I had totally forgotten about it. I've been extremely absent minded recently as my mind has been dwelling on my research work. The play was called "EverGold" and was done in Cantonese with sur (not sub) titles in English and simplified Chinese.

The reason that I had gone to see the play is because some of my friends are involved in it. The co-director and co-script writer is Katie Liu, a good friend of mine from Hong Kong. Daniel had been complaining about memorising his five lines of dialog. He did surprisingly well, considering that he doesn't speak Canto (he's half Iban). There were other friends involved as well, of course.

The hall was packed full. There were people literally sitting right on the 'stage'. Although the audience was predominantly Chinese, there were a few angmoh and other minorities around. Cambridge is truly a cultural melting pot. Even for the 'Chinese', they came from everywhere. Many of the cast members didn't really speak Canto (as was evident from their bad pronunciations). At one point, there was even an actress who spoke in Mandarin! I was wondering why until I caught the punch line. They were arguing over payment, playing with 4 and 10.

Actually, the whole play was extremely funny. The script was very well written, with strings of punch lines delivered in quick succession. However, a lot of the meaning is lost in translation. The acting was top notch. The guys really took a tumble and the I loved the drunk, rich lecherous dude. I don't really have a complaint about this production. It is really good. Even the lighting and sound was adequate. It was fairly easy to get really nice pictures.

At the end, there was a pastor from Hong Kong who gave a 'short' speech. According to a Christian friend of mine, he was a very good speaker. Although I found the speech rather 'long winded', my friend tells me that it's extremely short for an Evangelical speaker and he tried to keep the speech 'un-bible-y'. They also tried to raise some money for a charity fund that they organised. Well, the play was fun and good. I liked it a lot. Thanks for the invite, Katie!

UPDATE@1200: Forgot to mention that the songs were good and the singing was superb! They actually wrote the songs themselves. There are so many talented people in this world.

UPDATE@1400: I've uploaded some of the photos I took to my new web album below.

Shawn, thanks for coming and glad that you like it~ and thanks for the lovely pictures~~ hehe!