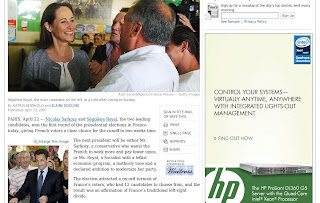 The French have finished their preliminary round of voting today. In case you have not been keeping up with international news, the French are having a presidential vote this week. It has been hailed as the most important vote in the history of France.

According to the article the turnout was massive. A record 84% of voters queued up to vote. They have an interesting system with two rounds of votes. The first round eliminates everyone but two, who will face-off in the final round. The results are already in and the prime candidates are Nicolas Sarkozy (29.5%) and Ségolène Royal (26.3%). As you can see, the competition is still wide open as the 44% who voted for the other candidates will need to pick a side now.

Why am I blogging about the French elections, you may ask. We have very interesting bye-elections in Ijok at the moment with supporters from both camps fighting with each other. Well, the reason that I have an interest in this election is because of each candidate's stand on the subject of free (as in speech, not beer) software. This is important because France is a major member of the EU. It has the necessary influence to ensure that software freedoms are protected in Europe, and by extension, the rest of the world as well. The reason that I'm saying this is because most Open Source Software (OSS) is currently being written in Europe. The most famous one is of course by our Finnish friend, Linus Torvalds.

Royal has openly stated her opinion on OSS. She agrees with the essential bits of the four fundamentals of software freedoms: freedom to use, study, improve and distribute. She's also of the opinion that developments using public funds should be free and that public authorities should develop a freedom based legal framework. Education should be free and in this regard, scientific information should also be made free. All this talk of greater freedoms does sound really good to an outside technology observer like me.

Sarkozy, on the other hand, has belatedly and reluctantly stated his 'opinion' on OSS. He expressed his support for patent law on the grounds that it encourages enterprises to innovate and to develop new inventions. He also believes that when it comes to the question about open standards, he doesn't believe that it's the purpose of the State to impose a model on anyone. He is also evasive on the subject of the DADVSI revision due at the end of this year. His statements are very contradictory as he both believes that the State should not impose, yet he believes that the law should protect enterprises.

Well, without going into the details of their politics and individual personalities, just based on these two answers, I can only hope that Royal becomes the next President of France, which would also make her the first female President of France. I do believe that the NYT shares the same opinion based on relative size and quality of the pictures in the article. I don't think that Sarkozy was depicted in a warm light. Well, it's none of my business anyway, and I'm just being a busy body (as usual).