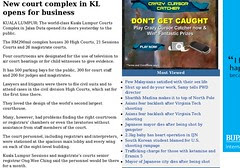 I was reading an article in TheStar on the opening of the new 'Palace of Justice' in Malaysia. It's heralded to be the second largest courthouse in the world housing 77 courts. I find all this very scary for several reasons.

Firstly, I do not like the idea of our country becoming more litigious. Actually, I just don't like the idea of too much litigation. The courts have a role to play in society. They are there to settle major disagreements (civil courts) and to hand down punishments (criminal courts) on people. In this sens they are like the umpire/referee in a game. However, the only people who benefit from too much litigation are lawyers. So, I just pray that our country doesn't become too litigious.

Secondly, I don't like the direction that our courts are being taken. A friend asked me the other day about my stand on abortion. My explanation puts me strongly in the camp that believes that personal beliefs should not become law. Law isn't meant to impose beliefs on others, but meant to keep society from turning into chaos. Our courts seem to be turning more and more religious these days. Granted, we have a fairly unique legal system where we have two sets of concurrent laws running. So, I just pray that this palace doesn't get converted into a religious establishment.

Thirdly, besides the function of enforcing the law by conflict resolution and reparations as I mentioned above, courts have another function. I would say that this is probably their greatest role of all. Courts are there to uphold and defend the constitution. With the recent blatant disregard for our constitution that the courts have taken, I have little confidence that they are able to carry out this task. The fact that families have been broken, children have been forcibly separated from their parents, and the courts did nothing to defend them when their rights are clearly spelt out under the constitution, just shows you that the courts are broken.

So, I do believe that the advertisement next to the article spells out the best thing to do in Malaysia. It's so befitting that the tagline for the advert is "Don't Get Caught". Hahaha. I find that extremely funny, yet fitting. TheStar must be trying to tell me something. Malaysia 'boleh' and all, just don't get caught. Else, you're screwed since the courts are visibly broken.

PS. I was kind of worried that the palace might experience a mysterious indoor rain and flood. However, it was built by the Works Ministry instead of el-expensivo ali-baba sub-contractors. So, it should be of a better quality, I hope.