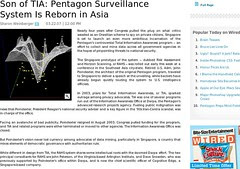 This isn't a Spore bashing blog. This time, I'm truly worried about our little island neighbour. They have taken a very bad step towards the dark side. It's a slippery slope that they have chosen to step on. I hope that some intelligent Sporean will wake up and do something before it's too late.

According to the wired article, an evil information system dubbed Risk Assessment and Horizon Scanning (RAHS), has been launched in Spore. This system is the direct descendent of the failed Total Information Awareness (TIA) programme, run out of DARPA. It is spearheaded by John Pointdexter, a key figure during the Iran-Contra scandal and the national security adviser to President Reagan. [That should already set off some alarm bells].

In essence, the system claims to be able to filter information from multiple sources, in order to extract patterns from it. It's marketed to governments to help them identify and act on threats before it happens. It got killed in the US for very obvious reasons as such Orwellian schemes are totally against the principles of civil liberties. [Now, sirens should be wailing].

However, Spore being an authoritarian democracy, doesn't suffer from such a weakness. So, it has been exploited by these snake-oil salesmen to implement such a system. The principle push of the system is that there is a lot of information today. Events such as 9/11 could've been stopped if the authorities had only seen the patterns in the information.

The fact is, it's not information that has been increasing, the endless streams of instant messages, emails, sms messages, phone calls and other stuff has increased the noise. Besides the very obvious technical flaw in the whole idea of seeing patterns in the increasing noise, it is very easy for such a system to be abused by any government for malicious purposes.

Simply put, almost all of the patterns detected by the system will have nothing at all to do with national threats. Any intelligent person should be able to see through the ruse. It's not terrorist attacks or any other form of threat to national security that is being solved by this system. It's the power to poke, prod and control it's own people that is being offered.

The fear is that once given an opportunity to fester, these kinds of invasive and evil technology will grow and spread to other parts of the free world. Whether or not this technology can actually 'see' anything useful is quite debatable. However, if one government starts to realise that it can control it's citizens better with this technology, other governments are more likely to sign up.

If this system is allowed to grow, you won't even be able to make babies without your government knowing about it before you do. Knowledge is power. Think about that. It's at times like this that I recall the words from V is for Vendetta: "People should not fear their government, their government should fear the people."