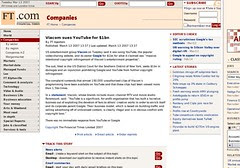 Google has just been sued for $1 billion by Viacom. This has already been predicted by many analysts, after the sale was complete. YouTube is full of copyright material and Google has been trying to stave this off by signing deals with studios.

If Google is able to fight this off, it just means that Google got a cheap deal when they bought YouTube for only $1.6 billion. The YouTube content alone is already worth more than the purchase price. It would be worth it as long as the cost of defending YouTube in the courts doesn't get too expensive.

Google cannot use it's typical excuse that it's just a search engine, in this case. This is because the content is housed on the server itself. The cost of policing the servers for copyright content would be too high to be feasible, unless Google manages to come up with new technology to automate the process.

Alternatively, they could enlist the users in the fight against infringement. YouTube already has a mechanism to flag 'objectional' content. This could be extended to flagging 'copyright' content. However, it still doesn't solve the larger problem, which is old media companies not catching up with new media.

If Google loses, it will open the flood-gates to financial ruin. All the other media companies would line up to collect their payments. So, Google will definitely have to fight this tooth-n-nail (or settle it for a payment). It sucks to be Google at the moment. It's now big enough to be a juicy target for blood-sucking leeches!