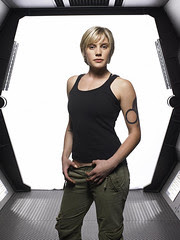 Yea, Starbuck isn't dead! She's very much alive. However, the question remains on how she managed to survive? The last episode of season 3 really leaves us in a cliff-hanger. Good thing that they have confirmed that season 4 is coming our way soon. Katee Sackhoff had already signed a 6 year contract. So, I'm quite sure that they expect to get 6-7 seasons out of this series.

Season 3 had been suffering from lower ratings as the stories seemed to focus too much on developing individual characters and less on the overarching plot. There was also less action, aside from the grand escape from New Caprica at the beginning. Then, things just began getting really really dark. However, they certainly redeemed themselves with the few plot twists at the end. I can't wait for season 4 now.

Having just watch episode 20 of season 3, there are some spoilers in this blog. They have directly revealed four of the final five cylons. Also, they have indirectly hinted at the fifth one. The problem now is, should we love the cylons or should we hate them. It's getting too damn confusing with too many characters that we love, being revealed to be cylons.

Of the twelve cylon models, the final five are certainly on the side of the humans. They consider themselves human and will continue to defend humanity against the threat of genocide. Of the other twelve, a single #6 and #8 model are also on the side of the humans. They are also the ones who will play the key role in the next stage of human's evolution.

It would seem that the humans and cylons are perfectly capable of living together and procreating. So, maybe the final season will see reconciliation between human and cylon, in order to search for earth. This seems to parallel things that are happening in the world today. Instead of going to war and killing each other, why can't we just live in peace with each other.

To those who are utterly confused by what I'm saying, please go out and watch Battlestar Galactica, the best space opera of all time, and possible the best TV show on. Buy the DVDs as well and watch them again and again (like I did). You will never regret it [except for the fact that each season ends with a massive cliffhanger!].

Random thought - Does that mean that chief's baby is also half human half cylon??

possibly, since hera was supposed to be the first of many, never the only one. but i guess, we'll have to watch season 4 to find out!!