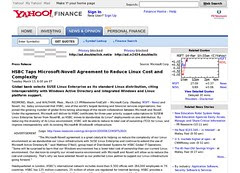 It looks like there's no stopping the tide now. Everyone is gradually switching to Linux. Today, HSBC is merely following the trend set by Deutsche Bank, Credit Suisse and other major companies. The biggest beneficiary is of course Novell.

Novell, after signing the 'extremely controversial' agreement with Microsoft, has been reaping massive profits ever since. However, this is only for the short term. Once GPLv3 comes out, it will try to cover up the hole in the current GPL that Novell is exploiting for this deal. Also, the terms of the deal aren't exactly fair. Microsoft has the stronger position in the deal and can back out of it at any time.

But all this started me thinking on a different thread. All these major Linux switches have been facilitated through the sale of Linux licenses by Microsoft. Assuming that a day comes, when Microsoft ends up selling more Linux licenses than Windows ones. That would make Microsoft a Linux reseller. And then, Microsoft can come up with it's own distro, called Microsoft Linux instead.

I wonder if this is Microsoft's dastardly plan for taking over the world again. Everyone knows their age old mantra of Embrace, Extend and Exterminate. Microsoft certainly has enough money to become the single largest Linux distributor in the world. However, it would first have to accept that Windows sucked. That doesn't seem to be as difficult anymore, seeing that everyone else is calling Vista the world's largest beta test.

Apple took that step a long time ago, admitting that the original MacOS sucked. Then, taking out BSD code, they built an excellent OS on top of it. Many people have wondered if Microsoft might do that one day. Build an OS on top of existing Linux/BSD code. Makes you wonder for a bit doesn't it. It would be a fairly interesting world if that happened.

I doubt that it would get to that level, though. However, I do think that Microsoft will try to gain some control over the Linux market. Through Novell, they have gotten a toe-hold that can be used to push things in certain directions. By controlling both Linux and Windows markets, it can continue to dominate the OS market. This makes more sense.